Friendship Pet Food Pantry supports the unconditional love between pets and their companions.
By providing pet food to Chicago residents in need, and informing them of low-cost health services, we aim to reduce the number of dogs and cats surrendered to shelters or abandoned each year because their owners cannot afford food or veterinary care.

Make a recurring monthly donation in honor of your pet & submit a photo for the Best Friends Gallery.

Every pet has a story. Select an image to learn more and view the slideshow.

Willow was born at an Arkansas shelter in 2004 and lived in an outdoor pen until she was 18 months old. Since moving to Chicago in 2005, she has slept on her humans’ bed every night and has road tripped coast to coast. Willow has Indigo to thank for showing her that almost all experiences are good, and almost anything that hits the ground is tasty. 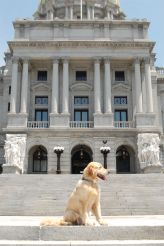 Indigo (1999-2008) posing in front of the Pennsylvania State Capitol in Harrisburg. A great road trip companion, she was photographed at dozens of state Capitols, from Sacramento, Calif., to Montpelier, Vt. She loved swimming and eating in every state and showed Willow where to find crumbs.

Iggy (left) was born in 2005 on our friend’s bed; they didn’t know their cat was knocked up. He likes salty food and has gotten his head stuck in more than one box of crackers. Olive came to us as a stray, into our triple-door-locked apartment building. No one in the building claimed to let her in. She is obsessed with our baby and wants to be around her all the time. Iggy and Olive mostly hate each other, but there was a bird in the tree outside, so that trumped all other feelings.

Olive came to us as a stray, into our triple-door-locked apartment building. No one in the building claimed to let her in. Olive is obsessed with our baby and wants to be around her all the time. 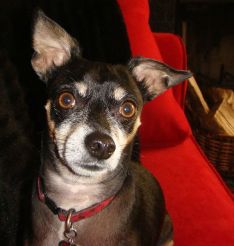 Dollar is a Boston Frenchie mix and came from a rescue group in southern Illinois. He has since made himself at home in Lincoln Square. You can find him dominating the neighborhood one tree at a time.

Dax (b. 2008) is a miniature rat terrier and a canine couch potato. 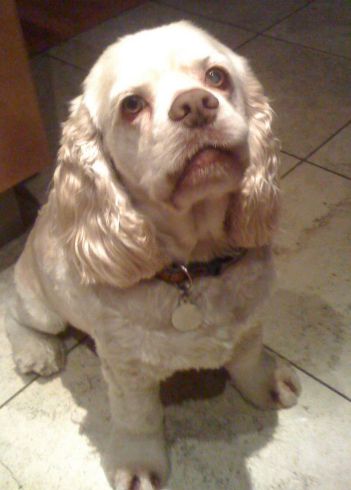 Fell in love with him on PetFinders.com. Bless the photographer who donated her time since Bill’s charm came shining through on the photo. He was only 2 when we met but somehow we were his fourth family. Lucky for us, as we have had eight great years together with many more to go.
Loading Comments...
Comment
×